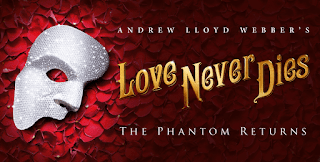 Part of my subscription to the Smith Center's Broadway series, I had never heard of Love Never Dies, Andrew Lloyd Webber's sequel to his monster hit, Phantom of the Opera. Perhaps this is because it never played on Broadway, and the current tour was the North American debut. It did play on the West End in 2010-11, received lukewarm reviews, and sank from sight.

It has since been rewritten, and began a second life in Australia, under the direction of Simon Phillips. I wouldn't have been keen on seeing it except that I read that it takes place at Coney Island at the turn of the twentieth century, which piqued my interest. I'm glad I went, because Lover Never Dies is really entertaining.

Set ten years after the end of The Phantom of the Opera, when the title character, pursued by many, disappeared, the masked man is running a sideshow called Phantasma on Coney Island. He was spirited away by Madame Giry, who was the leader of the corps de ballet at the Paris Opera House. After a prologue sung by the Phantom, the stage explodes into life at the sideshow, in a number called "Coney Island Waltz." The combination of costumes and set design are dazzling, and never let up through the running time of the show. I was hooked.

The Phantom's love, Christine, shows up in New York to play at Oscar Hammerstein's opera house. She is married to Raoul, who saved her in the first show, and their son, Gustave. But wouldn't you know that Gustave has a lot of the Phantom's talents and mannerisms? Raoul, who was a hero way back when in the silent film version of Phantom, is now a cad, and makes a wager so that the Phantom will leave them alone.

Lloyd Webber has had many great hits and a few misfires, but I found this score to be terrific. The CD cost $35 at the theater so I didn't buy it, but I would love to hear it again. A few of the highlights are "The Beauty Underneath," in which the Phantom realizes Gustave is a chip off the old cloak, "Devil Take the Hindmost," with the Phantom and Raoul squaring off in a New York City dive bar, and the title number, sung by Christine, the standard "eleven o'clock number."

Many alternates took the stage at the show I saw, so I'm not quite sure who played whom. I do know that Rachel Ann Moore was Christine, but I'm not sure who played the Phantom. Whom ever he was, I loved how he moved like a spider (and his perfect diction).

Love Never Dies doesn't deserve its fate as a footnote of Lloyd Webber's canon. It should be made into a movie by Tim Burton.
Posted by Jackrabbit Slim at 7:42 PM