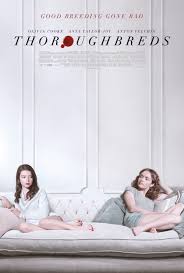 I don't know if I'll see a more unsettling film this year than Thoroughbreds. A lot of people are comparing it to Heathers, but they're off the mark in that Heathers was intentionally funny. Thoroughbreds is as about as serious as an autopsy, which one character will require.

I was amazed I was watching it in a multiplex, as it is certainly not a crowd pleaser. It doesn't seem to have a CinemaScore grade, but it did manage to make over a million dollars last weekend. I have a feeling it will drop precipitously, and that's not because the film doesn't have merit.

Two affluent Connecticut high school age girls (Anya Taylor-Joy and Olivia Cooke) used to be friends. Taylor-Joy went on to be popular and go to Andover, while Cooke is a sociopath (she admits she has no emotions) has been removed from school while being charged with killing a horse, but if I heard the film right, she performed a mercy killing (which doesn't make sense if she has no feelings). Cooke's mom hires Taylor-Joy to tutor her daughter for the SATs, and the girls forge a new friendship based on Taylor-Joy's hatred of her step-father (a very good Paul Sparks).

What's unnerving about the film, which was written and directed by Cory Finley, is the vacuum in which the film takes place. We see the girls' mothers, and Sparks, but that's about it. Taylor-Joy's spacious mansion serves as a kind of heated bubble in which no air escapes. There seems to be no outside world. The use of music is just one example of this--there are long stretches of no ambient music, but when the score does kick in, it's very eerie (it's by Eric Friedlander).

Also, Cooke's performance is scary good, so good that I don't know if I'll be able to shake it when I see her next (probably in Ready Player One). At one rare instance away from Taylor-Joy's house, Taylor-Joy visits Cooke's house. Her new friend is standing in the backyard, staring into space. There's also a wonderful scene in which Taylor-Joy and Cooke are talking while Cooke plays herself in a game of chess with very large pieces. I'll admit I found myself paying attention to her moves, which were all correct.

Thoroughbreds does have some humor. Taylor-Joy impulsively loosens the wheel on her step-father's bike. The film cuts to him in bandages, which is drolly funny until he abusively dresses down his wife for asking about his welfare.

The movie's ending is not completely satisfactory, as it doesn't add up, but it will stick with you. Whether you want that or not is another question.
Posted by Jackrabbit Slim at 11:37 AM