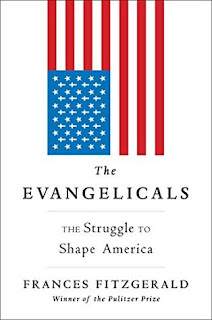 The Evangelicals, by Frances FitzGerald, just won the National Book Critics Circle Award. It is a thorough look at American history through the prism of evangelicals, who many Americans see as a fringe religious group. But, "evangelicals compose nearly a quarter of the population. They are also the most American of religious groups, and during the nineteenth century they exerted a dominant influence on American culture, morals, and politics."

What is an evangelical? The word is from the Greek for good news (the source of the word gospel). But there have been many offshoots. It takes some concentration to keep them all straight: pentecostals, charismatics, Southern Baptists, etc. Of course not all of them believe the same things. One of the most surprising things I learned is that there are liberal evangelicals, and those who do no find it seemly for religion and politics mix.

FitzGerald begins with the Great Awakening, which most of us may remember as being centered around Jonathan Edwards and his "Sinner in the Hand of an Angry God" speech. There was a second Great Awakening in the 1830s, and from there the history is long, going through the Civil War (a certain number of evangelicals were perfectly fine with slavery, but also many were abolitionists). But I think the meat of the book, as well as of most interest to general readers, is of the movement in the post-War era, starting with Billy Graham (coincidentally, I had read the chapter on him the day before he died). This ties into the mass-communication age, as Graham became "America's pastor." He was slightly to the left of most evangelicals of the time, as he did not condemn the civil rights movement, but that's a low bar, as he did call for the castration of gay men.

FitzGerald spends a lot of time with the most recent celebrities: Oral Roberts, Jerry Falwell, Pat Robertson, Jim Bakker (who somehow is still on the air), and Jimmy Swaggart. She goes into great detail about the founding of the Moral Majority, Robertson's run for president of the U.S., and the various councils and organizations, founded by people such as James Dobson and Ralph Reed. The book does manage to include the election of Donald Trump, and the strange support he has from evangelicals. Not all of them, though, as suggested by this statement by Russell Moore, president of the Ethics & Religious Liberty Commission of the Southern Baptist Convention. ""Trump’s “entire mode of life,” he said, “has been at odds with American evangelical conviction and character.” Moore, equally disgusted, said Trump could win only in a “celebrity-focused mobocracy in which sound moral judgments are replaced by a narcissistic pursuit of power.”"

The Evangelicals is generally even-handed, although predictably there are one-star reviews from those religious people who don't like any kind of criticism. Occasionally FitzGerald will let her feelings be known, such as mentioning that the "bathroom bill" in North Carolina, designed to ensure that transgender people went into the restroom that corresponded with their birth gender, was "ridiculous" and "unenforceable."

The book is impeccably written and researched, and is invaluable even to secular humanists like myself. While evangelicals have had an inordinate influence on electoral politics (mostly since Ronald Reagan) it is important to note that they are numerous and diverse. There are crackpots, yes, but some are serious thinkers and in the pluralism of our society, involved, even if they themselves are not. It isn't mentioned in the book, but I remember Paul Weyrich saying he didn't want the Republican Party being a big tent. And James Dobson's son wrote a book called Be Intolerant.

The history of the United States can't be told without steeping one's self in religion, and this book proves it.
Posted by Jackrabbit Slim at 3:23 PM